A simple little DIY washstand you can set up to create a Montessori at home environment. 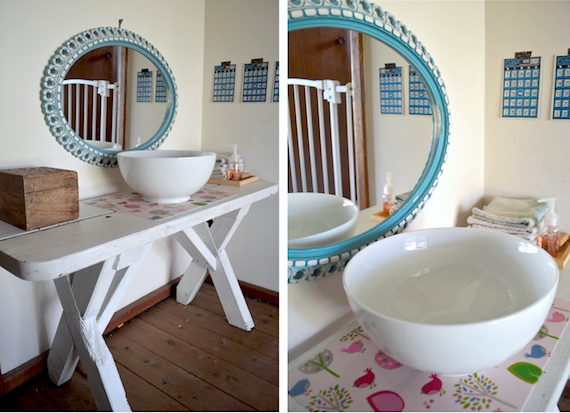 I thought I would share a little corner of my house that is inspired from my pre-kid-life working in a Montessori 3-6 classroom.

This is Scout’s washstand, it is her area to learn care for herself. She brushes her teeth, washes her hands and face, brushes her hair and blows her nose here. There is a little mirror, so she can see what she is doing, (not because I want her to get the whole Disney princess thing down) and I’m happy to report her nose blowing technique has improved dramatically from the use-the-tissue-to-spread-the-snot-onto-your-forehead stage to the wipe-some-but-leave-most stage.

Caring for yourself is a big part of the 0-6 Montessori curriculum and until I saw a small child carefully wipe his nose in the mirror it didn’t occur to me that kids don’t actually know what it looks like to have snot coming out their own noses, they just know how it feels to have someone swoop and face palm them with a tissue.

The washstand is really simple to set up, ours is made out of an old bench seat that we nabbed from council clean up about 7 years ago, it used to be our TV stand in our first apartment – before we owned actual furniture – this little baby just keeps on giving. I digress (that’s unusual) I have just put a heavy mixing bowl (so it doesn’t easily slide around) a pile of face washers, a beautiful little nail brush and a small bottle of handwash c/o How We Montessori Shop (quick go and visit them, they have a great blog and webstore dedicated to Montessori education). There is also a box with her hairclips and hairbrush in it and a little washing line to hang up the wet facecloths – but you don’t HAVE to have one of them, I just think it’s the cutest freakin thing I have ever seen and it helps with the process, kids love order!

Before we had baby Godzilla on the prowl this stand also held a jug of water so she could fill the bowl herself, her toothbrush, toothpaste, a box of tissues and a little bin underneath to put the tissues in. Now Squawk is at the pull-every-tissue-out-of-the-box-and-taste-everything-in-the-bin-whilst-chewing-on-a-toothbrush stage I have had to move some stuff behind the baby gate into the bathroom. He also likes throwing things in the toilet, just FYI.
In about six months we should be able to move it back, about the time he will be able to start using the stand. For now I just leave the jug on the bathroom bench and pass it to her when she wants to fill her bowl. I have set this up just outside the bathroom; which is also in the play room so it really makes this area of the house just for the little ones.

In most traditional Montessori classrooms each piece of material usually only has one use so you would have a handwashing station not unlike my one but it will only be used to wash hands. Somewhere else in the classroom there will be a place to blow your nose (maybe a mirror with tissues below it) and the children would keep their toothbrushes in baskets in the bathroom etc. As I have talked about here and here Montessori at home doesn’t need to be exactly the same as in a classroom so this is how I have tweaked it to fit in our little house.

*A few people have asked why not just a step up to the main sink rather than this. The answer is that the main sink is designed for an adult, the tap is difficult, it’s too big to fill up so she can really soak her hands and scrub her nails and balancing on a stool is not easy. Plus, just imagine using a sink designed for  a giant? It would suck, and being a kid is hard enough already.

By the way, did you see my new sponsor Forever & Between? They have the cutest handmade woolies for little people, you should go check them out too!