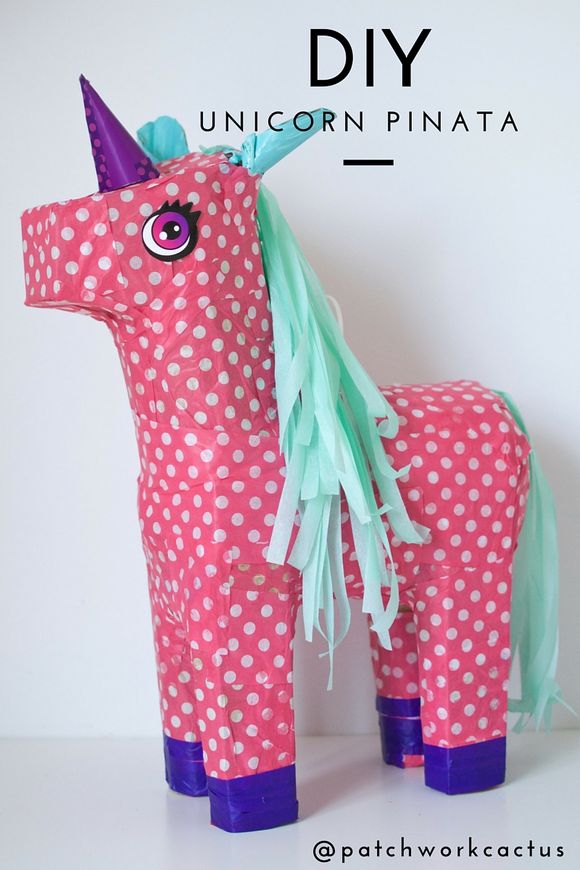 FINALLY, only two months after Scout’s Unicorn Picnic Party I have put together the tutorial for the DIY Unicorn Piñata.

Now I know in a perfect world that a Piñata has tasselled paper on it but – who the hell has time for that?

This little unicorn piñata is something that anyone can make, like all of my craft tutorials, it takes no talent, minimal cash and as little time as possible. Not because I’m rough, (ok, maybe because I’m a bit rough) because I am realistic. You guys don’t want masterpieces, you want cool shit that doesn’t cost the earth in cash or time.

And I think this little lady is pretty cool, don’t you? One donkey pinata- I got mine from Kmart for $12
About six sheets of tissue paper – pink spotty if you’re me.
Three glue sticks
Washi tape
Cardboard for the horn
Blue paint
Paper tassels Strip your unicorn back to cardboard (making sure to keep the eyes) while your husband, in shock, yells “what are you doing, you’re  ruining a perfectly good piñata!”

Next, pull off the ears and trim them a little bit and stick them back on so they lean back instead of forward. Now cut your paper into a mixture of squares and strips and glue it all over the cardboard using your glue stick. I tried it with a watered down wood glue but it didn’t work well, the paper was too thin, my hands were too sticky, it was basically a bit of a mess. Make sure you have a heap of glue sticks, I may just be heavy handed but I absolutely flew through it.

With some coloured cardboard, cut a semi-circle and make a horn. Stick it on with washi tape.

Now all you have to do it paint the ears, stick on the eyes and you’re almost done. Last but not least, you want to give her some flowing locks. I just bought a paper tassel garland from the party section in Kmart and washi taped it on. Simples. I think that’s it.

Actually, no it’s not. I also wrapped the bottom of her legs in washi tape, very roughly as you can see. Check out my other DIY tutorials here

Head to my Instagram to see my latest antics

Previous Post: « Who wants to win a $150 Minouche voucher? – Giveaway Closed
Next Post: 7 everyday hairstyles that aren’t a topknot »