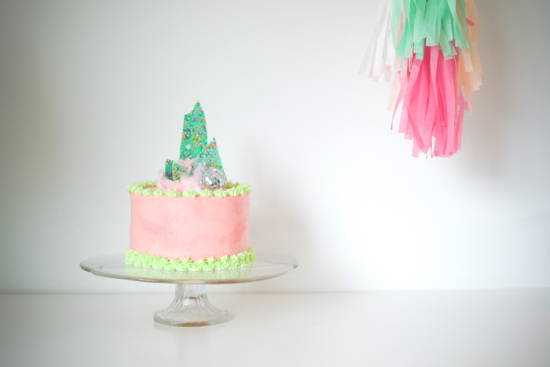 One of the good things about my being so busy lately is that instead of creating new content for the blog here, I have been going back through older images and actually getting around to posting them.

This isn’t exactly a recipe but more of an upstyle, because it started with some store-bought sponge, too easy right!

Do you know what that means?

Anyway, let me go back to the start.

When I saw Katherine Sabbath’s cakes on Instagram I knew I had to give her style a try. I had already tried a Coco Cake Land’s fox cake (and nailed it if I do say so myself) for Squawks first birthday so I was feeling confident.

Let me talk you through it;

The first step is to make the sparkle bark, the second is to layer and ice it, then you just have to add some decorations to that bad boy. Ok let’s do this. Some white chocolate
Food colour
A heap of sprinkles and crap

Just melt the chocolate over a double boiler, poured it on a baking tray covered in paper, dripped some colour on and swirled it around with a tooth pic. The other side is actually all marbled and cool so you could totally use that side. Next, just sprinkle a bunch of pretty stuff all over it and chucked it in the fridge. When it was hard, I took it out and dropped it on the counter to crack. And that’s step one, done. Before I explain what I did next, this is a video that basically explains exactly what I did so you can just watch that if you want.

Now for the no bake cake.

First I opened the packet that the sponges came in, it was quite a difficult step really. Next I stacked three layers of sponge with two layers of pink buttercream that I made with this recipe and covered the outside as smooth as I could get it.

In Australia, this isn’t as easy as it sounds, but don’t stress, if it’s a hot day just make sure you pop the cake in the fridge whenever it feels a bit sticky and take a quick break.

After you make sure it is all smooth just pipe on the green rosettes. Again, if it is really hot I find that wearing an oven mitt on the hand that is holding the piping bag will stop the icing melting. #aussiebakingproblems Finally just shove some sparkle bark in the top and dress it up with a bit of fairy floss. It isn’t pictured here because fairy floss tends to melt if you let it sit around, so only put it on when you’re about to do the candles. Also, disco ball. For realz. No bake cake people!